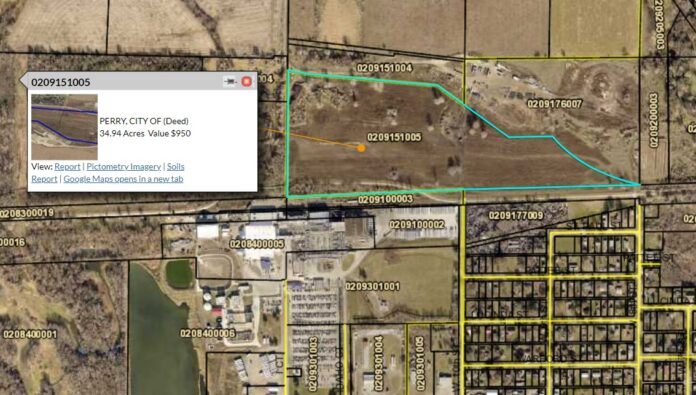 The Perry City Council entered a 25-year lease agreement with Alliant Energy Monday for a solar energy array to be built on the brownfield area on the city’s west side. The partnership with Perry marks Alliant Energy’s first customer-hosted solar project in Iowa.

The city will receive $45,470 annually in rent on the seven-acre parcel as well as renewable energy credits that can be used to offset the city’s greenhouse gas and carbon dioxide emissions and help Perry progress toward its sustainability goals.

“Our collaboration with Alliant Energy on this facility will provide financial, environmental and educational benefits to the city and area residents,” said Perry City Administrator Sven Peterson. “The city of Perry looks forward to hosting a solar energy project in our community.”

The solar array — expected to be online by mid-2022 — will be located north of the Tyson factory and near the old Milwaukee Road roundhouse on a remediated brownfield where the city has tried for several years to put a renewable energy project. A 2015 proposal for a 5 megawatt set of solar collectors at the same site did not come to fruition.

“It is important to understand that an unexpected discovery on the property or unforeseen market conditions could impact the size of the project, your estimated annual lease payments or the construction schedule,” said Zack Hill, senior resource development manager for Alliant Energy. “As you know, because the project would be located on a brownfield site, it may have some unique environmental challenges that will have to be addressed.”

Peterson said he was confident project will see the light of day.

“The new Alliant Energy program allows us to move forward to build a solar facility, which will help us redevelop a property that is challenging to reuse,” he said. “In addition, the Raccoon River Valley Trail is adjacent to this installation, and that will provide a highly visible opportunity to promote and educate the public regarding solar energy. It’s an ideal site for the project.”

Once installed, Alliant’s solar-power site will produce about 1 megawatt (MW) at peak performance. The estimated annual electricity production of a 1 MW system is about 1.7 million kilowatt hours (kWh), enough power for about 150 average-sized U.S. homes.

“We are excited to partner with the city of Perry to support the community and bring more clean energy to our customers,” said Mason Adams, Alliant Energy key account manager. “This is the first Alliant Energy Customer-Hosted Renewables solar facility in the state of Iowa. This project is a win-win that will benefit the local economy and the environment for many years to come. It represents our vision to provide a clean energy future for our customers and the communities we serve.”

Adams said he was glad the Customer-Hosted Renewables solar proposal met the city’s guidelines, and the city’s goal to have clean energy generation on the land will soon be a reality. He said Alliant Energy’s Clean Energy Vision aspires to attain net-zero carbon dioxide emissions from the electricity it generates by 2050.

Alliant Energy will oversee construction of the solar facility and will own, operate and maintain it, and the 25-year lease agreement provides for up to three extensions of five years each. There are no upfront, financing or other costs to the city of Perry.

Perry’s ongoing efforts toward reducing its carbon footprint have included the conversion to LED lights in all city facilities, installation of solar panels on buildings at the Raccoon River Valley Trailhead and adoption of a green building code for new house construction, which includes a streamlined permit process and low permit application fees for solar building. The city earned a SolSmart designation in 2016 for these efforts.

Proposals are due April 15 for the installation of photovoltaic solar panels on most other city buildings. 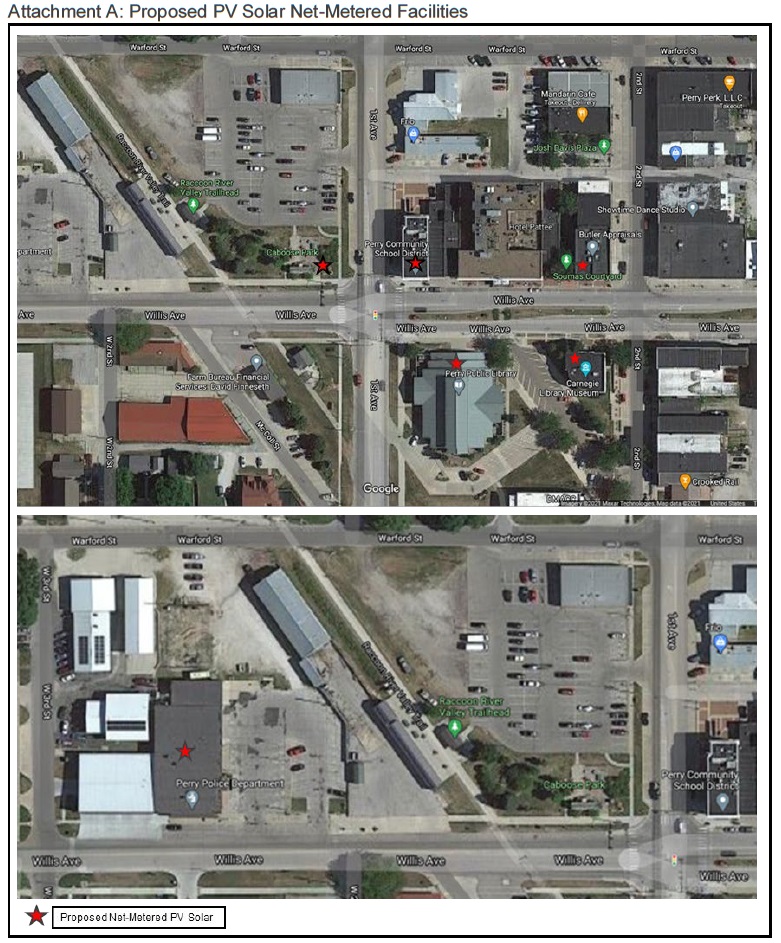