Large and enthusiastic crowds cheered on the entrants and king and queen candidates Wednesday in the first Homecoming parade held in Perry since 2007.

Grand Marshalls Mike and Shari Garber led a long procession from the Perry High School west down Willis Ave, with the parade turning north on Second Street. and ending just past Pattee Street.

One of the more popular portions of the parade came when the Perry Blue Brigade Marching Band strode by onlookers, playing both the Perry fight song and other numbers. It was the first parade performance for the full Perry band in many years.

The event was sponsored by the Perry Chamber of Commerce. Each class (freshmen, sophomore, etc.) had a float in the parade, each of which had several chamber businesses as sponsors, helping to defray costs and provide locations at which the hay trailers that were used could be decorated.

Several businesses and civic groups also had entries in the parade, as did St. Patrick’s Catholic School.

The Let’s Connect fundraising group, which seeks to link the Raccoon River Valley Trail with the High Trestle Trail, marshaled fourth and fifth graders from both the Perry Elementary School and St. Patrick’s. The youngsters joined the parade at Eighth Street and continued west on Willis Avenue, riding along to advance awareness of the trail-connector group.

The Perry football, cross country and volleyball teams marched the route as well, with the Bluejay gridders taking the time to sign team posters outside Raccoon Valley Bank after the parade.

The Perry Hy-Vee teamed with the Raccoon Valley Bank to sponsor a free-will hamburger, hot dog, chip and drink dinner. Members of the junior class helped serve the meal, with the proceeds donated to the prom committee.

Members of the public were also able to take a closer look at the class floats, as all were parked along Second Street after the parade. 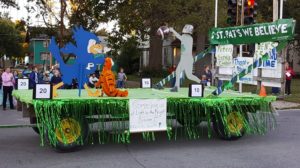 The event also drew international attention, as a film crew from Japan’s NHK Network covered the very ending of the parade and the festivities along Second Street that followed.

The two technicians and female reporter, who declined to give their names, have been in Perry and other smaller towns in Iowa for several weeks filming short vignettes “about what it is like to be a student in a small American high school,” ThePerryNews.com was told.

All their footage will be edited into a series of stories that will air “later this year” in Japan, the film crew said. NHK is a public broadcasting network (similar to PBS in the United States) that is funded by license fees paid by viewers.

Homecoming activities continue Thursday with a pep rally and the coronation of the king and queen, beginning at 8 p.m. in the PHS gym. A bonfire will be held immediately afterwards at the Perry Athletic Complex north of the school.

At 1 p.m Friday students will assemble in the PHS gym for Game Day fun and games, with the conclusion being the awarding of the coveted Spirit Stick, which goes to the class who has collected the most ‘spirit points’ during the week.

Spirit Stick points are earned by participation in dress-up days, Volunteer Day, classroom door decorations and Game Day activities. The Class of 2017 will be seeking a three-peat, as they won the Spirit Stick as sophomores and juniors and seek to go out with three-in-a-row honors.

Perry will host Gilbert at Dewey Field Friday for the Homecoming game, with the freshman contest starting at 4:45 p.m. and the varsity game at 7:30 p.m. The Homecoming dance will follow the game at PHS.