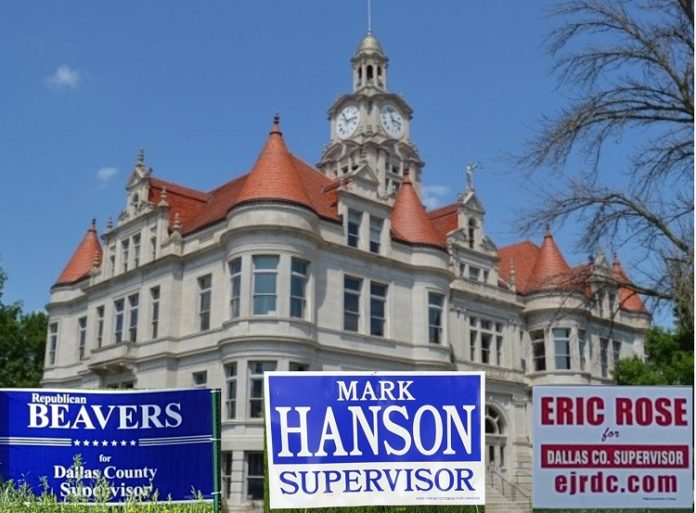 Today — Tuesday, June 7 — is the day of the 2016 primary election. In the races for county-level offices, the most crowded ballot is faced by Dallas County Republicans, who must choose among three candidates seeking the party’s nomination for a seat on the Dallas County Board of Supervisors.

With no Democrats in the running for the supervisor’s seat, the winner of the Republican primary election is almost guaranteed victory in November’s general election.

Three-term incumbent candidate Mark Hanson of Waukee is challenged in his bid for reelection by Douglas Beavers of Dallas Center and Eric Rose of Minburn, both first-time office seekers with extensive private-sector experience.

Hanson points to his 12-year track record on the Dallas County Board of Supervisors, which he currently chairs. His website leads with his fiscal conservatism, in particular Dallas County’s low tax levy rate, one of the lowest in the state, and his low-tax leadership “has been instrumental in the county receiving an upgraded Aa1 bond rating from Moody’s Investor Service,” Hanson said.

No doctrinaire hater of taxes in the style of Grover Norquist and similar anti-government radicals, Hanson notes the many positive accomplishments of the county government during his tenure, such as the $10 million restoration of the Dallas County Courthouse, begun in 2005.

He said he is also proud of the recent renovation of the former Dallas County Care Facility and its conversion into the Dallas County Human Services Campus, housing several county departments, such as public health and community services, and also serving as the Dallas County Sheriff’s communications center.

“Repurposing the old county home has given us some unlooked-for breathing room,” Hanson said, “but the growth rate of Dallas County’s population makes a new law enforcement center and additional administrative space inevitable. The county voters have rejected the bond measure three times in three different forms, so we’ve had to be creative in our arrangements. Our departments operate incredibly efficiently and effectively, in light of their space conditions, and that’s a testament to them and also to the board of supervisors’ management of this chronic space shortage.”

In addition to his duties as a supervisor, Hanson sits on several other boards and commissions, such as the Greater Dallas County Development Alliance, New Opportunities Inc., the Dallas County Historical Society and the Metropolitan Planning Organization. He is a member of the Raccoon River Watershed Association and the Raccoon River Valley Trail Association and helped found the the Dallas County Wetland Bank near the Voas Nature Area, a resource for developers in need of wetland mitigation credits.

“It is a privilege and an honor to serve Iowa’s fastest growing county and a responsibility that I take very seriously,” Hanson said. “I care deeply about the future of Dallas County, and I am committed to maintaining and improving the exceptional quality of life that Dallas County offers.”

Douglas Beavers is a 28-year employee of Stine Seed and has risen through its ranks to a management position. He said he has “always had an interest in Republican politics, and this seemed like a good time to jump in. It’s time for a change.”

Beavers emphasizes Dallas County’s rapid population growth as a central issue in his campaign. He said the county’s “day-to-day business is getting taken of” by the present board of supervisors, “but they don’t have a vision or plan. They don’t have a five- or 10-year plan for how to get in front of this growth or how to handle it properly.”

He said the tension between rural and urban voters in the county needs to be addressed and managed, and he cites his own experience a decade ago during the tussle over the location of the Dallas Center-Grimes High School as an example of the tension.

“The rural part of the county feels the county’s operations are all geared to serve the interests of the cities,” Beavers said, and while this perception might not be accurate, it is entrenched. “We need to have a vision for the future if we’re going to keep growing and getting bigger.”

The county’s growth rate also conditions Beavers’ opinion about expanding the size of the board of supervisors to five members. He said he “was really in favor of it prior to the meeting” May 10 between the supervisors and several mayors, “but after to listening to the discussion, I see there are pros and cons on both sides of the question.”

He said continued growth will make an expanded board necessary, “but it will take time and a lot of preparation and educating the public.”

Beavers also mentioned the turnover rate among county employees — he said the rate for employees with nine years of service or fewer is about 70 percent — and he called it a symptom of “a large disconnect between the supervisors and the employees, and I would really like to bridge that gap and make the employees feel they are valuable, that we want to keep them and that they’re not just there to fill a position.”

For more information about Beavers and his positions on issues, visit his Facebook page.

Eric Rose also takes an active interest in the question of Dallas County as an employer and the effectiveness of the bureaucratic organization of county government. There are currently about 250 full-time employees of Dallas County and another 125 part-time and seasonal workers, according to the Dallas County Human Resources Department.

Rose said he learned a lot about the workings of county government “by osmosis” from his father, who was a 30-year veteran of the Pottawattamie County Secondary Roads Department. Rose himself took a degree in management and has an extensive background as a manager. He is now semi-retired.

“County government has a layer of management that doesn’t respond and is not accountable to the taxpayer,” Rose said, “and sometimes our elected officials don’t know all the particulars of a position. My goal is to bring in auditing methods to make sure everyone’s doing what they ought to be doing and doing it efficiently.”

Rose said the layer of unelected technical-managerial experts is necessary and inevitable, but they still remain unaccountable to the taxpayers even though the supervisors rely on their recommendations. He calls for a system of auditing the county management that is analogous to the Iowa State Auditor’s annual financial audit of the state’s 99 counties.

“These would be performance audits done by experts in management best practices,” Rose said, noting “it’s a little cumbersome to run an organization that’s voter- and taxpayer-based, and voters can choose someone to run the organization no matter how much or how little he might know about a phase of the organization.”

Rose also addresses the rural-urban tension within Dallas County. He said his campaign’s extensive phone surveys lead him to believe “the north and west end of the county feel they’re not in the stream of things.” He said the northern and western businesses also “feel they don’t have access to meet county needs on a business level the way those businesses in the southeast part of the county do.”

Rose said he would lead a countywide review of department purchasing practices in order to ensure equal treatment across the board.

For more information about Rose and his positions on the issues, visit his website.

Voting begins at 7 a.m. Tuesday, June 7 and continues until 9 p.m. A countywide list of precincts and locations is available here and on the Dallas County Auditor’s website.