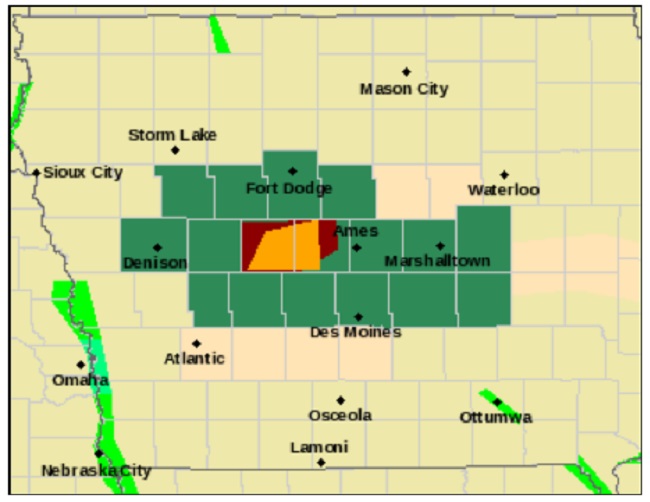 A severe thunderstorm warning is in effect until 4:15 p.m. for eastern Greene, western Boone and Dallas counties, the National Weather Service office in Des Moines has announced.

At 3:28 p.m. the leading edge of gusty winds with a severe thunderstorm was located 8 miles southwest of Ogden or 8 miles north of Perry and moving east at 30 mph.

At 3:39 p.m. a severe thunderstorm was located near Perry and moving southeast at 40 mph.

Wind gusts of 60 mph are reported.

Remain alert for a possible tornado! Tornadoes can develop quickly from severe thunderstorms. If you spot a tornado, go at once into the basement or small central room in a sturdy structure. For your protection move to an interior room on the lowest floor of a building.

In addition, a flash flood warning is also in effect until 9:15 p.m. for Greene and Boone counties.

At 3:20 p.m. Doppler radar indicated thunderstorms producing heavy rain across the warned area. Up to three inches of rain have already fallen. This is in addition to areas of heavy rainfall last night.

Torrential rainfall is occurring with this storm,  and flash flooding is expected to begin soon. Do not drive your vehicle through flooded roadways.

Additional rainfall amounts of one to three inches are possible in the warned area.

One arrested in one-vehicle accident in downtown Perry