The Perry Public Library and the McCreary Community Building closed at noon due to the heavy snowfall, and all activities in the Perry Community School District have been called off for Friday and Saturday.

Snow continues to move northeastward through central Iowa Friday afternoon, causing visibility to drop to less than one-half mile at times. Winds from the southeast, gusting between 30 and 40 mph, also reduce visibility.

Snow reports so far range from between one and three inches over southern Iowa with additional accumulation expected across the state. The transition to freezing drizzle with strong northwest winds gusting to 45 mph might result in a flash freeze on roadways.

Travel is not advised. If you must travel, keep an extra flashlight, food, and water in your vehicle in case of an emergency, the NWS recommends.

Take five or 10 minutes and fill out your U.S. Census

HIRTA to give free rides through end of month 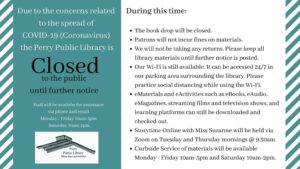