JOHNSTON, Iowa — The eligible age for phase 1-B vaccinations has been lowered from 75 to 65, Iowa Gov. Kim Reynolds announced Thursday in a press conference.

Responding to the revised phase 1-B guidance, the Dallas County Public Health Department said that the “changes further expand eligibility to those at increased risk for severe illness. Many will be eligible, but vaccine supply is still limited, so we ask for your patience as we get everyone vaccinated.”

Reynolds also emphasized that the demand for the vaccine far outstrips supply at present.

“The national vaccine supply remains limited,” Reynolds said. “Each state is being allocated a weekly amount,” she said, and Iowa’s “weekly allocation could begin to increase starting the week of Feb. 8 and each week following.”

Reynolds said the state has so far received about 160,000 doses and administered about 106,000, with 82% of the shots given to frontline medical workers. She said 22% of medical workers have already received their second doses and are now fully vaccinated.

The Iowa Department of Health has “engaged a variety of vaccine providers and other resources to assist in the expanded vaccination effort,” Reynolds said, “from local pharmacies and clinics to state and local strike teams that will vaccinate essential workers onsite at their place of employment.”

The U.S. Department of Health and Human Services is managing the vaccine administration at long-term care facilities in partnership with national pharmacies. Reynolds said some 116,000 doses have been allocated to the program so far, with the first round of doses expected to be completed by Feb. 1.

Reynolds was joined at the press conference by Kelly Kennedy Garcia, director of the Iowa Department of Human Services and interim director of the Iowa Department of Pubic Health. Garcia offered an example of workers at the Woodward Resource Center (WRC) as “vectors leading to the spread in community” who are eligible for vaccination in phase 1-B.

“We have a number of employees working there (at the WRC) who live with individuals who work in meatpacking plants,” Garcia said, “and every time there’s an outbreak in a meatpacking plant, we see that spread in our Resource Center.”

Aaron Wiese, Hy-Vee vice president of health and wellness, also spoke at the press conference. Wiese said Hy-Vee’s vaccination program is operating in 140 stores across Iowa, and he noted the Dallas County distribution has been particularly effective.

“In partnership with Dallas County Health Department,” Wiese said, “we began vaccinating the front-line health workers at two of our pharmacies at the end of December and had distributed all vaccines in just over 24 hours,” Wiese said. 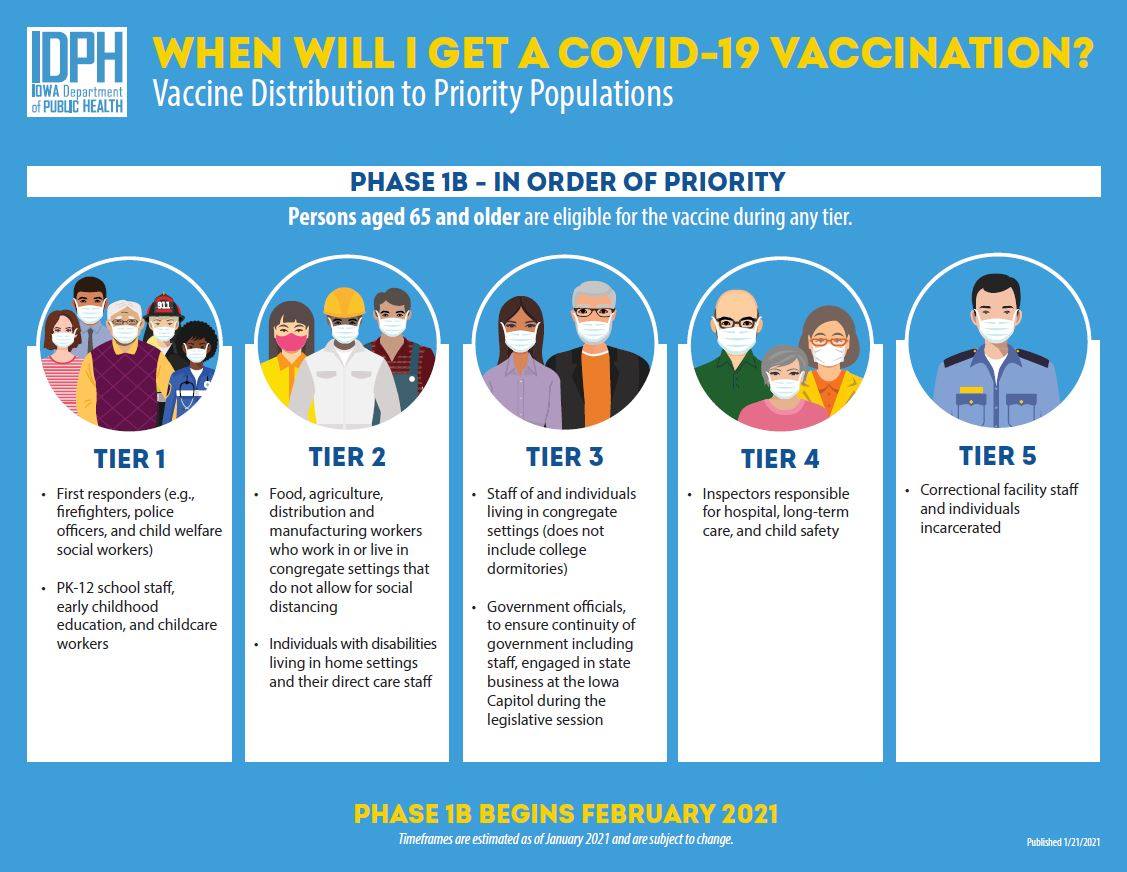