Hartz spent June 14-19 at Iowa State University, where she learned about the workings of American government while hearing from several guest speakers, including Iowa Secretary of State Paul Ryan.

“Each floor in the dorms were their own community, and mine was named Harper-Ray,” Hartz said. “On our first day we were divided into Republicans and Democrats — you did not have a choice — and we learned about the caucuses and how the parties work. You could run for office if you wanted, and I was elected treasurer for Harper-Ray.” 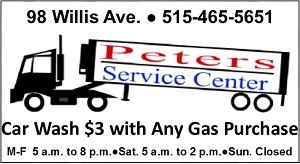 Hartz noted the daily schedule began at 7 a.m. when all gathered for an official flag raising ceremony. The girls were also witness to an official flag disposal, the honorary rites involved with the burning of old, retired Star Spangled Banners.

“We had a lot of fun, but by the time we were done with things at 11 p.m. each night we were tired,” she smiled. “I made life-long friends and learned things about my government that I did not know. Now that I am 18 and am going to be voting for the first time it means even more to me.”

Hartz shared a scrapbook she made of her experience with the assembled Legionnaires and thanked the local post for sponsoring her week at Girls State.

Fellow senior Sean Riley was at Camp Dodge for the Boys State camp during the same dates, but was not able to be present at Tuesday’s gathering.