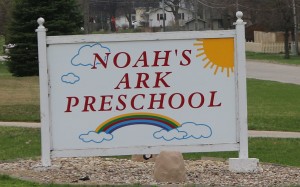 Trinity Lutheran Church Pastor Ken Bose said attendance at the pancake breakfast was “overwhelming. We had people waiting in their cars to get in before eight o’clock, and it’s been a steady stream of people ever since.”

Bose said they started the day with 13 dozen eggs, and he had to make a run for six dozen more. They used up all the pancake batter, too, he said.

Holly Killmer, director and lead teacher of Noah’s Ark Preschool, said new registrations were also coming in. Killmer and her daughter, Macy Killmer, 12, greeted parents in the school’s classroom and introduced them to the program.

Among the breakfast diners were Madonna Woodley and her son, Fred Woodley, who drove down from Grand Junction for the pancakes and fellowship. Madonna Woodley said she knew Ken and Sue Bose when they were at Trinity Lutheran Church in Jefferson and enjoys their company.