About 20 readers from the Perry area took part in the 13th annual All Iowa Reads community-wide book discussion Thursday night in the community room of the Perry Public Library.

Novelist Robin Oliveira’s “My Name is Mary Sutter” was the 2015 selection, and the Perry discussion was facilitated by George Minot, award-winning novelist and graduate of the Iowa Writers’ Workshop. Minot is a professor of English at Kirkwood Community College in Cedar Rapids.

Oliveira’s novel is set in the American Civil War era. It tells the story of a midwife who aspires to become a surgeon, an occupation admitting very few females in the 1860s.

Almost all the people attending the Perry discussion were female, so the novel’s theme of a woman’s reaching beyond the conventional gender limits of that period in our history might have found sympathetic readers.

Minot opened the event by discussing the tension in the novel between choice and necessity.

“We’ve all heard the expression, carpe diem, seize the day,” Minot said, “but is there also a sense in which the day seizes us?”

His fellow readers agreed Mary Sutter was a woman of strong character who made her own decisions, but she was also swept along by events beyond any one person’s control, such as the American Civil War. 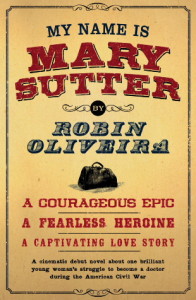 “This is an immaculately constructed and structured novel around time,” he said. “Nearly every word was chosen with care. It is a very writerly novel.”

Oliveira’s strict faithfulness to historical accuracy was also noted, with the sometimes starling details of 19th-century medicine drawing much notice. Oliveira has described in interviews the depth of her historical research.

Graphic descriptions of routine surgeries during the war play a prominent part in the novel, set in a time when surgeons in combat field hospitals might average 35 amputations a day and the use of pain killers and sterile instruments was unknown.

The novel contrasts the relatively crude state of medical science with the overwhelming destructive power of the world’s first industrial-scale war, the U.S. Civil War of 1861-1865, which introduced automatic weaponry and high-powered artillery.

The Franco-Prussian War of 1870 and the First World War of 1914-1918 saw further advances in the military capacity for mass human slaughter.

Yet Mary Sutter found time for love amid all the horror and carnage, and her family troubles–with her mother, her sister and her various suitors–play out against the background of the war.

Minot read out several passages from the novel: “This is how hearts are broken, Mary thought. By love and allegiance gone awry,” and “How women defeat one another; how need defeats women.” The passages elicited many interesting comments from the assembled readers. Some speculated there can be be emotional amputations as well as physical.

All Iowa Reads is a program of the Iowa Center for the Book in the Iowa Library Services and State Library.

Perry Public Library Director Mary Murphy said she was pleased with the interest shown in this year’s selection.

With two weeks till show, rehearsals intensify for musical