FORT DODGE — At 7:30 p.m. Tuesday something will happen at Harlan Rogers Park that has not occurred since 1999 — the Perry softball team will play in the state softball tournament.

A loss sends the victim into Wednesday’s consolation bracket, with the consolation semifinals played at 12 p.m. and both the fifth and seventh-place games at 4 p.m. The semifinal winners meet for the title Friday at 12:27 p.m. with the third-place game Friday at 11:30 a.m.

“She is a first-strike pitcher,” Perry head coach Tina Kenney said. “Her strikeout pitch is a good rise-ball, and she has a good change-up she will throw at any time in the count.

“We need to be aggressive and go after that first pitch if it is a good one,” she added. “We do not want to let either the umpire or their pitcher determine our at-bats, and we don’t want to chase strike three if it is not a strike.”

The Indians feature an offensive attack that boasts only one player hitting below .306. The offense appears slightly more evenly-spread than Perry’s, but only by a small margin.

“I think it is a real even match-up between us,” Kenney said. “What we need to do is what we have done lately, especially against Norwalk and DC-G, and that is to get out early, play good defense and see if we can’t shake them up a little bit.”

That will, of course, require the Jayettes to avoid any hiccups should the Indians grab a quick lead, but Kenney said she was confident in her team’s attitude.

“I really like the confidence we have shown lately,” she said. “Playing at state is a whole different thing, of course, but I think our wins have really cemented our belief in each other and I don’t expect us to be rattled by much.”

Rattling the opponents has been the forte of Jayette strikeout queen Emma Olejniczak, who enters the tourney second in 4A having set down 283 batters on strikes. The opposition is hitting just .155 off the junior, who sports a 1.43 ERA.

While Oskaloosa has played, and lost, to several 5A teams, Groet was not in the circle for those games. She has pitched only sporadically in the three weeks prior to the postseason and has not lost since a 6-2 setback to DC-G June 8. She lost, 7-0, early in the season to Pella Christian but has not faced a ranked 4A foe since tossing a one-hitter in a 3-0 blanking of DC-G June 21.

Olejniczak, meanwhile, has thrown in eight losses to teams ranked first, second, third, fourth, 10th and 12th and should have an edge in battling any adversity.

The Jayette offense has been sparked by lead-off hitter Jo Diw and clean-up batter Rachel Kinney, who have 56 and 54 hits, respectively, between them. Second hitter Sid Vancil leads the team with 38 RBIs, with Alyssa Kruger (batting third), hitting .350 with 34 RBIs. Olejncizak and Victoria Hegstrom have come up with big hits, with the final three in the order — Maddy Jans, Brooke Huntington and Maddie West — all quite capable of getting the big hit when needed. 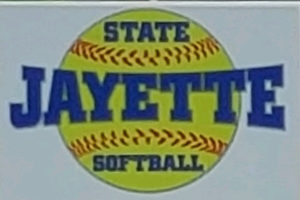 Both defenses appear stout, but the edge in the outfield belongs to Perry, who has committed just two errors in 36 games while Oskaloosa is guilty of seven in 34 outings.

Perry spent Sunday playing Laser Tag and having dinner and desserts in Des Moines and, according to Kenney, are in a “great frame of mind.”

“I like how we are handling this,” she said. “We are excited and I am sure we will be a little nervous, but the girls know they can handle it and know they deserve this. In the past we have not believed in ourselves at big moments, but that is behind us now. All we need to do now is go out and play our game.”

Fans will have a chance to cheer on the team before they leave Perry Tuesday as the team bus — expected to be lavishly decorated — will leave PHS at 4 p.m. and head west down Willis Ave to downtown Perry, giving the public a chance to salute their team as they head to Fort Dodge.

The team will also be present at a grill-out/team rally Monday at Hy-Vee, with the event beginning at 5 p.m.

If you appreciate reading the kind of sportswriting only ThePerryNews.com can provide, who not help keep it coming as a $5-a-month sponsor? For the price of a hot dog and soda, you can keep the great local sports coverage you have come to expect a click away! To get started, simply click the Paypal link below.