Pippa White’s “Voices from Ellis Island” revived the lived experiences of half-a-dozen or more immigrants who passed through America’s “front door to freedom” between 1892 and 1930.

The one-woman show was staged Saturday afternoon at the Perry Performing Arts Center in the Perry Fine Arts performance series.

“Voices from Ellis Island” is based on true experiences of immigrants to the U.S., including the rigors of crossing the Atlantic Ocean by ship and the gauntlet of tests and qualifications run on the Ellis Island processing center. Immigrants had to pass a medical exam and a literacy test and show they had the financial wherewithal to support themselves instead of becoming a “social responsibility.”

In a 75-minute series of seamless vignettes, White embodied by turns immigrants from Scotland, Ireland, Russia, Italy, Bohemia, Romania and perhaps several other Eastern European locales. Notable was the charming 12-year-old Rifka, a Jewish girl from Russia, whose pluck and poetry symbolized the immense value added to American society and culture when Liberty said, in the words of poet Emma Lazarus:

Send me your tired, your poor,
Your huddled masses yearning to breathe free,
The wretched refuse of your teeming shore.
Send these, the homeless, tempest-tost to me,
I lift my lamp beside the golden door!

White’s theater company, One’s Company, produces her one-woman shows. She has an extensive background in theater and has appeared on television as a child actor, trained at the American Conservatory Theatre Academy and hosted a daily morning television show on ABC for five years.

The next Perry Fine Arts event is Friday, March 11 at 7 p.m., when the Des Moines Metro Opera performs selections in English from Rossini’s “Cinderella.” The production will be made possible by a grant from the Bock Family Foundation. 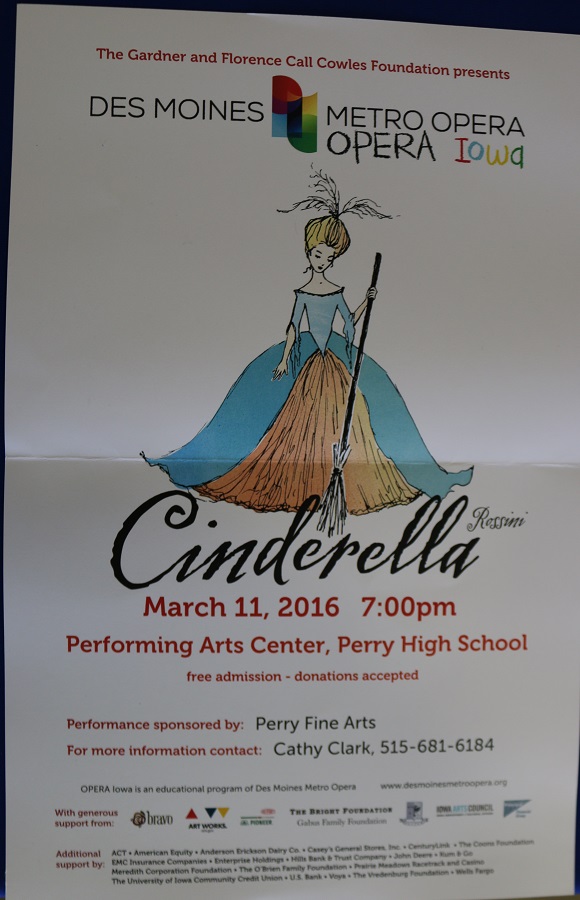